Do what is right, not what is easy.

In his latest essay, “Humans/Inhumans,” Bas Heijne doesn’t mention neoliberalism, and precisely because of that, liberalism and social democracy get an “uppercut” of sorts. This is not entirely justified, since both are only partly responsible for the contemporary chaos. According to the author, liberal democracy has seriously neglected and even denied its ideals – more freedom and equality, belief in progress and limiting too much power for anyone. 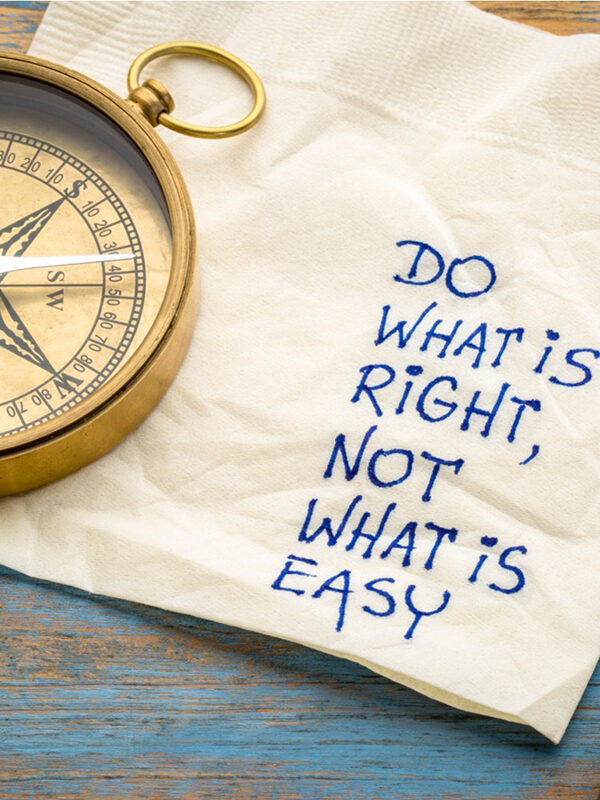 The reality is that liberalism has allowed itself to be drawn into an aberration of free-market expansionism and the obstructive belief of politicians, CEOs and shareholders that society and humanity will not prosper if there is no economic growth. In effect, we have thus made our planet and people subservient to the economy. As a result, eight of our ten biggest challenges are now ecological in nature. Problems that, according to the World Economic Forum [Global Risc Report 2020], were caused by ourselves. According to Heijne, neoliberalism, with the support of Nobel Prize-winning free-market economists, exploited the opportunities that liberalism always leaves to the expansive, pragmatic initiative, which comes at the expense of social liberalism, the planet, and ultimately people’s health and well-being.

Neoliberalism really came into its own with the many privatizations and devised, among other things, the participation society. A do-democracy and proposed society in which everyone who can, takes responsibility for, and actively contributes to his or her own life and environment. As a result, the Netherlands now has about 1.3 million self-employed people, of whom about 15% have a disposable income below the ‘low-income threshold’ and hundreds of thousands of self-employed people face poverty. This social and spiritual-cultural crisis was amplified almost simultaneously as social democracy jettisoned its ideals because the goal – getting re-elected – was more important than the intention – facilitating progress for all, within the boundaries of our ecosystems.

According to Heijne, there is no denying that liberalism and social democracy have both allowed themselves to be taken for a ride by neoliberalism. In practice, the latter has ensured that many companies were allowed to receive and unwrap generous gifts from The Hague, including compensating foreign losses with profits in the Netherlands – such as Shell, Unilever, Akzo Nobel and Philips. This costs Dutch society about 8 billion a year, enough to grant all students in our country a basic grant again and to hire 60,000 teachers. Another example: Tata Steel received a gift from The Hague to emit one billion euros worth of CO2 for free for ten years. Despite this, Tata Steel is the leader of the lobby against emission tax, while this measure is absolutely necessary to achieve the Dutch climate targets. Meanwhile, neoliberalism grotesquely widens the gap between rich and poor and feeds populism, antagonism and distrust. It is sad to see how The Hague responds to incidents and fights the symptoms, instead of governing forcefully with character. Support or not, in times of cumulative crises we need leaders, not weak managers who lend their ears to the electorate, which lives by the delusion of the day. The same applies to cowardly magazines, superficial columns and meaningless claptrap on TV, which compete for circulation and ratings, but add no real value for anyone and anything. What does this say about humans, about us – that we are lost in consuming emptiness.

Emotions and sentiments elevated to truth

Heijne, in Men/Unmen, does not so much criticize the ideological turnaround as he does its consequences, including nationalism (Brexit), the political manipulation and elevation of emotions and sentiments to truths, and the emerging need for authoritarian and populist thinking. In The Hague, politicians and political group members are exploring how to curb the power of the courts. It looks like Poland. The low point is the verdict in the ‘Case Urgenda versus the State of the Netherlands’. “Violation of human rights” was the verdict up to the Supreme Court against the Dutch State. Society stands by, looks at it and thinks and does nothing else. We continue with the order of the day. People are not rational beings and we have forgotten the Enlighteners who urged us to think for ourselves.

Enlightened as we thought ourselves to be, we complacently closed our eyes to our own ambivalences

In his brilliant book, Heijne makes us descend into the caverns of our thinking where it is not always pleasant to be. Our epicenter that guides and hinders us. Reason, the house where Homo Economicus lives, next to his good neighbor Homo Liberalis. We may be the “great-grandchildren” of René Descartes and Baruch Spinoza, but new knowledge about our origins and the workings of our brains make it clear that we are not rational beings. Humans believe in stories and follow the best storytellers. We think and act on impulse, can hardly separate real from fake news and, to make matters worse, are too quick to judge. Furthermore, we appear to be brimming with prejudices and limiting beliefs. Before the Enlightenment, it was assumed that man is inclined to evil and dependent on God and the crown. In contrast, enlightened thinkers see man as inherently good, autonomous and independent. Utility, man’s dignity and his pursuit of happiness in this earthly life (and not in the afterlife) were the starting point in ethics. Centuries later, we see that the Enlighteners shot themselves in the foot and it becomes apparent how little enlightened we are by nature. Surely we may now recognize how ambivalent the reasonable Homo Economicus is and how much he also reasons everything in favor of himself and always keeps his own interests central. In Man/Unman it is mainly about the complacency of right-thinking people, who retreat into their own bubble and see the world through their rose-colored glasses. Living in these bubbles seems nice, but is also unrealistic, especially if we actually consider all the externalities outside our bubble.

We have pushed our planet and presumably only habitat to the brink of collapse, and the spiritual-cultural crisis is greater than ever. For many decades, the global economy has been extracting more resources from nature than it can restore on its own. Our economic system is a monster with an insatiable appetite for more, more and more. ‘Maximize Me’ and ‘Bigger is Better’. According to the IPBES report, it is certain that more species are now threatened with extinction than at any other time in our human history. Independent evidence suggests an imminent rapid acceleration in species extinction, which is already tens – if not hundreds – of times higher than the average for the past 10 million years, even in the absence of increasing causes. The economy is slowly and steadily consuming all our plant and animal species until they are no more. This has far more impact on our future than you might think. In fact, human existence is completely dependent on nature. In fact, humans are nature too. All of our resources are provided by nature, as is our food. Genetic variation is the foundation of the stability of natural ecosystems. If that balance is disturbed too much, those ecosystems collapse, posing a direct threat to our living conditions, prosperity and well-being. It is unprecedented, disconcerting and yes, also a bit discouraging. After all, isn’t it already far too late to turn the tide? Previous targets for halting the decline in biodiversity have not been met, not by a long shot. Every time it comes down to it, Homo Economicus sets other priorities (‘it’s the economy, stupid’). It is actually very simple: nature can never win the fight against our economic system. Because she is not part of it. We see it as a ‘resource’, a source from which we can continue to extract endlessly. So it stops, cries the enlightened thinker who thinks that in the face of so much irrationality and non-humanity he can make do with reason.

Connecting with our presenting selves

Heijne wonders how we can shake off our complacency. He then focuses on the question of whether there is a way to bridge the oppositions of the identity thinker and enlightened thinker described here. How do the optimists, opportunists, realists, and pessimists find each other? How do proponents and opponents find each other?

According to Heijne, we find the answer in the Sermon on the Mount. “The human being who does not make things difficult for himself, who does not dare to go against his own urges, who does not dare to examine his own views and convictions, does not lead a valuable life and is not a true human being.” Not a Homo Verus, rather an inhuman. This is an important conclusion from the Sermon on the Mount, for it means that man is never more human than when he examines and torments himself with it, and when he acts selflessly against his own instincts of safety and self-preservation anyway. When he faces his enemy and when he reflects what has hurt him and therefore hates him. To forgive, because forgiveness is something you do primarily for yourself, to make room in your heart for love for yourself and for others. This goes straight against our feelings and instincts, says the American biologist Robert Morris Sapolsky, who also believes that the I-Thou and the We-Thou thinking are deeply chiseled into our script.

So the big question is:

How do we transcend the I-they and the we-they thinking, when we no longer want to remain hostile to each other?

People’s greatest fear is that “they are not good enough” and that “they are not loved enough. As a result, we seek control and belittle other people to make ourselves feel better and greater. But it’s a big black hole and a destructive addiction. It leads to even more insecurity, ambiguity and fear and ultimately these are disastrous for the body and soul. It is a form of self-loss, often motivated by resentment, a fear that no longer knows where it came from. The Homo Verus, the truthful man, often manages to avoid this, because the mere threat of it is purifying. But then you must not dismiss all the criticism you receive daily as a conspiracy against your self-righteous reasonableness and banal jokes. Or as the Sermon on the Mount points out, “Is it a merit if you love those who love you? And if you treat only your brothers and sisters kindly, what extraordinary thing are you doing?” How comfortable or confronting are these words?

According to Heijne, only loving who loves you is “narcotic safety. How harmful is our action to ourselves when it is directed only to harm others? Everything in our lives seems aimed at making it easy for us. By being quick to judge, by not thinking carefully and by elevating emotions and sentiments of others to truth. The idea is not to give in to this too much. Otherwise our lives will be as comfortable as they are meaningless.

And just to conclude with perhaps the most beautiful treatise from the Sermon on the Mount on “self-loss,” – to seek out the enemy and what you hate. To let go of one’s own identity as much as possible, to make one’s identity porous – thus making room for others, for the ‘he and she’.